Wow. I really did not think my kids were paying attention.Oh and be assured adults while are you are posting stop bullying MY kids are paying attention. I guess you could not miss the noise yesterday. We had a lot of school to do and my WiFi was down. I was glad. I did not want to hear it. I’m used to scrutiny. I became a Christian at the age of 14. Nobody applauded me. My aunts and uncles were not there saying we are so glad you have hope in your life. It did not matter to them that for the first time ever my heart smiled. My brother actually was the first to hear about Christ. He was on a ship in the Marine Corps, floating outside of Turkey around the first Iraq war. 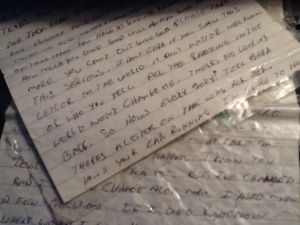 He sent a letter home telling us of his decision to trust in Christ as his Savior. Later that month a lady my sister worked with came over to drop something off. She was one of “those” born-again Christians. We showed her the letter and asked questions. I decided that day in the driveway. I wanted it. I wanted this Christ. I went in my house and knelt down in that 572 sq ft house in Sandy Hook, CT and asked Jesus to forgive me of my sin and be my Savior. I was finally free. I honestly felt so imprisoned in despair. My heart smiled. Since then I have tried to be the best Christian I can be. Man I have failed at times. So yesterday I thought about what he said. Why? Why can gays , Muslims, blacks, minorities, disabled, and everyone else have a voice but Christians are hated? Please don’t think it is about the right of an individual. If that were so it would not have been directed at Jesus. Then I heard a collective voice on Twitter and Facebook after my WiFi came back on.. Maybe you could hear it too? ” Crucify Him! Crucify Him! It just keeps getting louder the throng is pushing forward. Their mouth is an angry viper spewing its venom. They hate Him. They hate what he stands for. He gave up His own life for them, yet all they can do is yell Crucify Him! This week in the quiet of my heart I know the answer. ” If the world hate you, ye know that it hated me before it hated you” (John 15:18) That doesn’t mean I go out of my way to be unlikable. That’s what bothered my son. I’ve made meals, attended funerals, watched kids, sent packages, cards, prayed you name it. He said. “So where is everyone when you are in pain? When you had back surgery or Sierra was having seizures? I see what people say mom. If you were drinking alcohol with them or participated in the things they did they would help you” For my son that bothers him. Sometimes he just wants to see the evidence of the “doing”. I have been doing for a while. I guess I know the drill. Can you picture it though? Where were all the people Jesus healed when they nailed those nails into his feet and hands? We are not talking little tiny nails. Lets think tent spikes. Let’s think he had been whipped and beaten so now he is bloody and you cannot tell he is a man( is visage is marred).

This is not the anemic wimp portrayed in most pictures. This is a strong carpenter who has been tortured. So where are the scores of people He helped? Then they jerk the cross into the ground. Imagine his back jostling on that cross after the torture. That is the thanks He gets. Am I any better than my Lord? Do I deserve a better reward here? Have I even done half the good as Him? I just go back to the day He set me free. Yes, I said free. The word REDEEM.REDEE’M, v.t. [L. redimo; red, re, and emo, to obtain or purchase.]
1. To purchase back; to ransom; to liberate or rescue from captivity or bondage, or from any obligation or liability to suffer or to be forfeited, by paying an equivalent; as, to redeem prisoners or captured goods; to redeem a pledge.
That is from this huge dictionary I have by Noah Webster 1828. Can you imagine me on the auction block. My Redeemer comes. He sets me free and “If the Son therefore shall make you free, ye shall be free indeed.(John 8:36)
So they can hate me and yell and their voices can get louder and louder. My life was changed. He set me free. I am Redeemed.